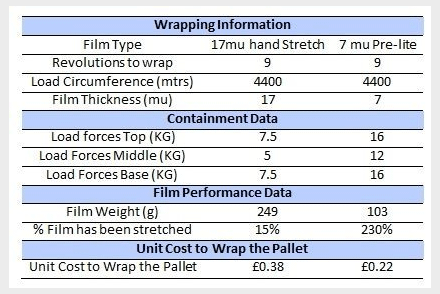 A leading UK logistic company approached Manupackaging with a request to decrease their cost of stretch film, without reducing load containment.

A Manupackaging representative conducted a free STATS audit which then was used to make recommendations on how the goods could be wrapped more efficiently whilst still achieving the correct holding force in order to ensure their pallets were transported securely.

The customer was using a 17 micron hand film material.

We recommended our 7mu Pre-lite® film, which both, reduces consumption and increases load containment.

Using Maupackaging Pre-Lite 7 micron stretch film; enabled us to increase the overall film yield but also to show higher pallet containment levels. This was due to the pre-stretched nature of the film.

A natural characteristic of Pre-lite is increased holding force and puncture resistance, so even though the film thickness was reduced by 59% we were able to achieve significantly higher holding forces.

Manupackaging's recommendation, produced 103g of film used per pallet; a cost saving of £42,240 per annum. We also increased pallet stability by 8.5kg on the top and bottom of the pallet.

The Customer was so happy with the outcome that we were asked to conduct STATS at all of their UK based sites, showing the customer a total cost saving of around £370,000 per year.